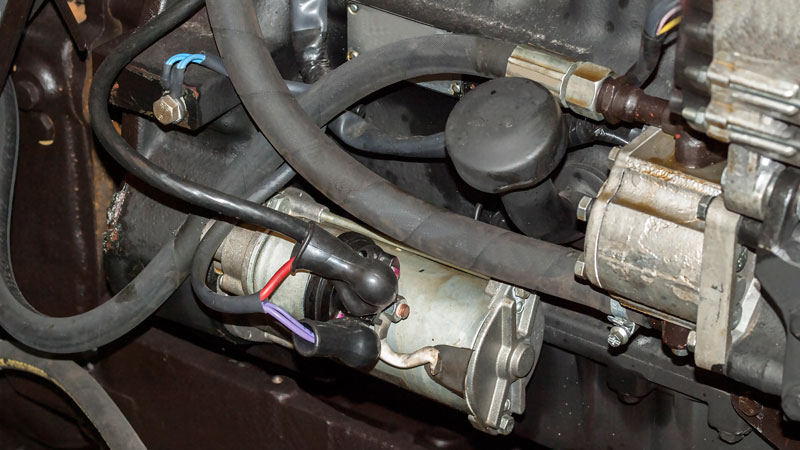 An internal combustion engine needs four things to run: air, fuel, spark, and compression. Compression is created by spinning the engine. If the engine is off, how would you get it moving again to create this compression?

Enter the starter. A starter is a big electric motor that is designed to spin your engine when you turn the key.

If your starter goes bad, it’ll often give you audible queues to let you know. Keep reading to learn some of the common sounds a faulty starter makes as well as how to bypass the starter to get you moving again.

Why Do Cars Have Starters?

Many years ago, engines had to be hand cranked. Hand cranking the engine meant you had to spin the flywheel manually, bringing the rotating assembly up to a sufficient speed to generate compression and start the engine. This was accomplished using only your brute strength.

Since flywheels are very heavy, this was a difficult process for some individuals. If it was cold or wet outside, the driver would have to endure the elements for a while to start their car.

Modern engines also have much more compression than very old hand cranked engines. This means there is a significant amount of cylinder pressure created by the piston rings sealing against the cylinder walls. This strong compression makes it even harder to turn the engine by hand.

As battery and electronics technology advanced, an electric starter became the obvious solution. Starters are fairly compact and can spin a flywheel much faster than you ever could by hand, while requiring no effort from the driver.

A starter can fail in a number of ways. Sometimes the starter may fail suddenly, and other times the failure is intermittent as the unit slowly begins to go out. When you turn the key to crank the engine, the gear on the starter is supposed to extend to make contact with the flywheel teeth. When this doesn’t happen, or the gear does not stay engaged long enough, you will hear a whirring sound.

This whirring sounds similar to a household vacuum or electric fan.

If you hear this noise, stop cranking the car as soon as you can. Prolonged cranking may break teeth off of the flywheel, which is much more expensive to fix than replacing the starter. If you turn the key and hear one or several clicks, the starter gear may be contacting the flywheel, but unable to engage for some reason. If you’re experiencing an intermittent failure, you can sometimes get the starter to work properly by trying again.

Don’t try to start the engine too many times or you may overheat the starter. This could cause a burning smell and create a fire hazard.

If the starter motor fails to disengage with the flywheel after the car has started, you will hear a persistent grinding noise that sounds a lot like marbles in a can being shaken hard.

It’s important to get this issue corrected as soon as possible. If the starter is not able to disengage with the flywheel the starter motor will spin much faster than it was designed for. This could be a fire hazard.

Sometimes when the starter fails, it just quits without warning. When this happens, you will want to check to make sure another component hasn’t failed. Check to make sure the battery has sufficient charge, and verify that no fuses have blown.

How Can I Start My Car Without a Starter?

If your starter has failed, you still may be able to start your car and get home, or limp it to a mechanic. If you’re driving a manual transmission vehicle, you may be able to bump start your car. To do this, turn the key to the ON position. Push the car about jogging pace and shift into second with the clutch depressed. Next, engage the clutch.

Once the engine is spinning fast enough to idle, quickly disengage the clutch to keep the car from stalling. Your engine should be running on its own now.

You may have to practice this a few times to get it right, and every vehicle is a bit different. Some vehicles may prefer a different gear as well.

In most vehicles, the starter sits next to the transmission. Some starters are visible from the engine bay or by peeking under the car.

If the starter is within reach, you may be able to tap the starter with a solid object like a tire iron to get it working again. This may indicate a bad connection to or within the starter, such as a bad starter solenoid.

Some starters are hidden within the engine or transmission. For those implementations, this trick probably won’t work.

If your starter is on its way out but not totally dead, you may simply be able to start the car by turning the key again. If this trick works, don’t think you’re in the clear just yet; the starter will probably fail completely in the near future.