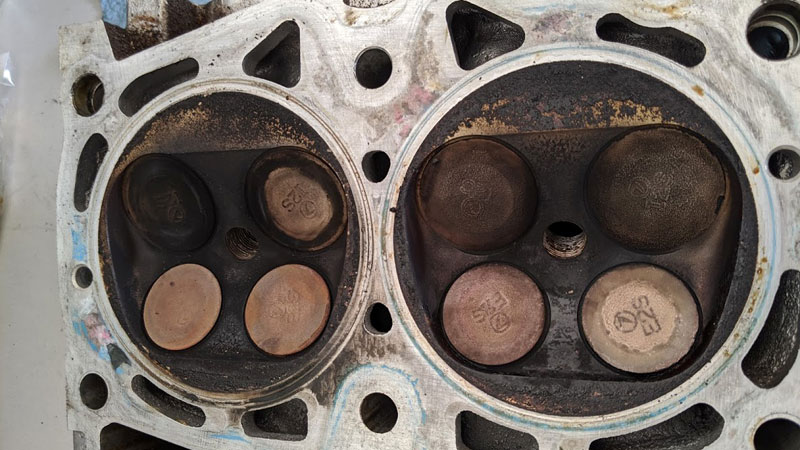 In a four stroke combustion engine, intake and exhaust valves play a critical role in a vehicle’s ability to turn fuel into power.

What Do Valves Do? Valves control the movement of a fluid through a system. Inside your car engine, that fluid is air.

On the compression stroke, the intake valves and exhaust valves must both remain closed to build potential energy before the combustion mixture is ignited. The force from this combustion is what gives your vehicle its power.

Most modern V8s have 32 valves, but the LS engines used in Corvettes (the LS3, LS4, and LS5) only have a single intake and exhaust valve per cylinder, which is 16 valves total.

Top Causes of a Bent Valve

1) Over Revving the Engine A vehicle manufacturer sets the redline of an engine based on many factors. For instance, the weight and balance of the rotating assembly, the strength of the valve springs, heat, harmonics, and the available oil supply may all be considered as the engineers design and stress test the engine. Even the transmission may play a role in this decision.

On manual transmission vehicles, it is possible to over rev the engine by downshifting into a gear that is too low for the speed the car is traveling at. Also known as a “money shift”, this is an expensive mistake that may cost you an engine.

If you were to engage the clutch while the wheels are spinning too fast for the selected gear, there is nothing the ECU can do to stop you from causing serious mechanical damage. Your own brain is the transmission computer for a stick shift, after all.

It is generally not advisable to run the engine higher than the manufacturer’s redline unless you upgrade many of the engine’s internal components. The upgrades you need will vary for each make and model. The “timing” of an engine may refer to the ignition timing, which tells the spark plugs when to fire. Timing may also refer to the mechanical cam timing of the engine. The cam timing tells the valves when to open for each cylinder as the crankshaft rotates.

Cam timing is usually handled by running a timing belt or timing chain over a set of pulleys and sprockets. As the crankshaft rotates, it turns a belt that turns each cam at a predetermined ratio with respect to the camshaft rotation.

In many engines, it is possible for the pistons to contact the valves if the engine’s cam timing is incorrect. This design is called an interference engine.

A non interference engine is an engine design that has the valves and pistons spaced far enough away from each other that there is no possible way for them to contact, regardless of the timing.

If the timing belt or timing chain is replaced but the engine is not timed correctly, it is very easy to bend a valve on an interference engine.

If you are changing a timing belt yourself, it is important that you follow all of the vehicle manufacturer’s instructions according to the factory service manual. Turn the engine over by hand a couple of times to make sure no internal components are contacting before you button everything back up. 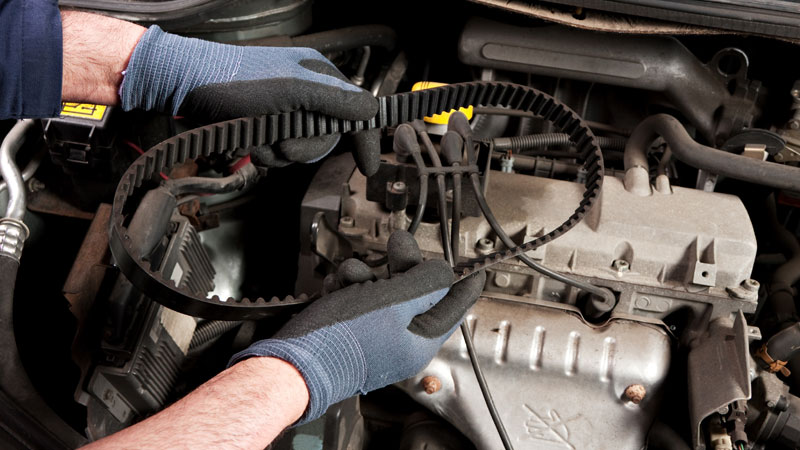 If the timing belt were to snap on an interference engine, there is a very good chance that a piston will contact a valve and bend that valve. This is one of the reasons why it is critical to change your timing belt on time.

Timing belts will usually work perfectly fine until they don’t. There may be no warning at all before a timing belt snaps. At the very least, a broken timing belt will leave you stranded.

Timing chains usually require no maintenance unless there is a problem with a timing chain tensioner.

Engine oil is critical for the health of your engine. If the engine oil level is too low to deliver adequate oil pressure to the whole engine, any number of problems could occur. One of these problems is a valve getting stuck in the valve guide, which could bend the valve if it’s sticking out and a piston can make contact.

Few problems caused by oil starvation are cheap to fix, but checking and maintaining your oil level is very cheap. Don’t forget this critical step of your vehicle ownership.

How to Tell If Your Valves Are Bent

The best way to tell if you have a bent valve is to remove the cylinder head so you can physically get your hands on the valves. Since this involves a lot of work, most people will do a compression test or leak down test instead.

A compression test will tell you how much compression each cylinder is making. It is a quick and easy litmus test to gauge the health of your engine.

A leak down test is performed by hooking up compressed air to the spark plug hole of a vehicle and turning the crankshaft until that cylinder is on the compression stroke. Once achieved, you should be able to listen for which part of the engine air is rushing out the fastest.

Please note that just because you hear air escaping from these places doesn’t necessarily mean you have a bent valve. You may simply have some carbon buildup around the valves causing air to escape from a poor seal.

This would still likely call for a valve job to fully correct, but you may be able to mitigate the issue with an additive like sea foam.

My Valves Are Bent. Now What?

Depending on how low your compression is, you may want to have some head work done. The extent of the head work needed will vary in each case, so it would be wise to lean on your mechanic or the machine shop’s judgement for this.

If you have other engine problems, sometimes replacing the engine with a lower mileage used engine is a reasonable option as well.