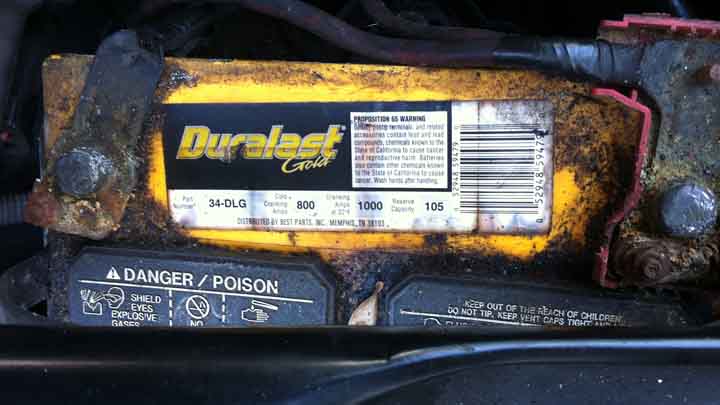 The main function of a car battery is to help start the engine. After that, the alternator takes over by converting mechanical energy into electrical energy for all the vehicle’s electrical components.

But the car battery needs to be functional or else this entire process doesn’t even start. A car battery should last for a good 2 to 5 years, depending on how much you drive your vehicle and the climate you are in.

However, if you notice that your car battery is losing too much power or going dead a lot sooner than it should be, then something is causing the car battery to be drained of its power too quickly.

There are lots of reasons for a car battery’s power to be drained. Below are five of the most common reasons that should help you figure out why your car battery is dying prematurely.

When people get electrical problems, they often don’t know whether it’s the car battery or the alternator that’s gone bad. If it’s the alternator, this can actually cause the battery to lose power and go bad soon afterward.

Alternators are responsible for recharging the car battery with power. But if the battery is old or too worn out, then it won’t be able to get recharged properly and hold power like it used to.

This means you’ll constantly have problems trying to start your vehicle. This is the case with any rechargeable battery. You probably notice your 3-year old iPhone doesn’t last as long on a charge as it used to on the day you bought it.

It is possible to have a good battery and alternator, but to still have a problem when it comes to charging the battery. This problem lies within the charging system and it can cause power to be drained from your battery as the vehicle is being driven.

To make matters worse, the battery power will drain even more if you’re using things like headlights, air conditioner, or radio. These types of problems can be a huge headache diagnosing and should be left to electrical diagnostic experts.

A lot of newer vehicles will automatically shut off its electrical components when you turn off the engine, get out of the vehicle, and then shut the door. However, if the door does not completely close or you didn’t completely close the trunk, then it could still leave the headlights or cabin lights on all night long.

This will drain the battery and then you’ll find that your car does not start up in the morning. Hopefully, your vehicle has features that will prevent this from occurring.

If you turn your engine off and the vehicle’s electrical components continue to operate, this is called a parasitic drain. Sometimes this can be normal when it’s just powering the security system and clock of your vehicle after it’s turned off.

But if it’s powering other things like dashboard computer screens or headlights after the car is turned off, then you have some kind of electrical problem that is draining your battery.

3 thoughts on “What Drains a Car Battery? (5 Common Causes)”