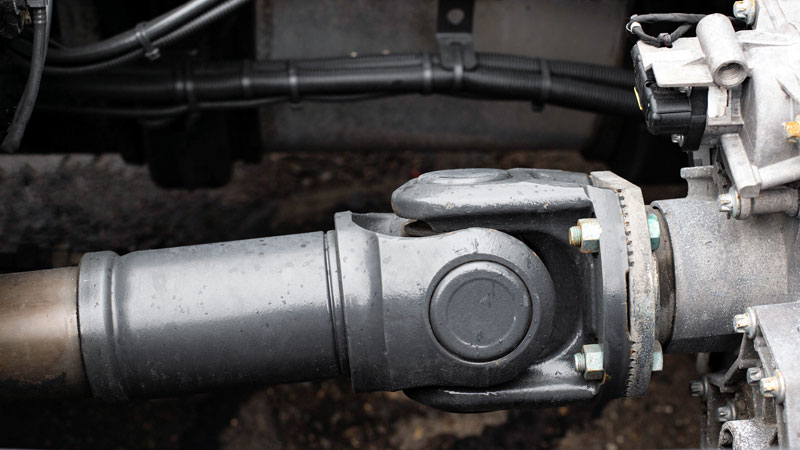 As the engine is running, power goes into the transmission which then rotates the driveshaft. The driveshaft will then transfer power over to the differentials which then allows the wheels to rotate.

It is basically like one big chain reaction if you think about it. If any one of these components were to be faulty or damaged, then it would interfere with the whole process of moving or turning your vehicle. A bad driveshaft is often the culprit when it comes to certain noises.

Top 4 Reasons You Hear Noise From Your Driveshaft

If you experience some strange noises as you’re turning, braking, or going in reverse, then it is likely a problem with your driveshaft. You may still be able to turn the wheels just fine, but these noises could be an early warning sign that something is wrong.

Therefore, they should be addressed as soon as possible before there ends up being a real problem that impairs your driving ability. Here are four common causes of driveshaft noise when braking, turning, or driving in reverse.

There are stiff rods with inclining axes under your vehicle that are able to stay attached by components called universal joints. These are also known as “U-joints” and they are necessary for your driveshaft to successfully rotate and move the differentials.

But if you have been driving your vehicle for a while, the universal joints will become excessively worn out and will eventually fail. This is when you will hear strange noises like ratting and scraping. Replacing the bad U-joint is the only remedy.

If your failing universal joints have gone beyond just causing noises, it will also cause the driveshaft to get loose and dislocated under the vehicle. This will create an even more noticeable noise than the previous one.

Each time you step on the brake or turn the steering wheel, the noise will just get louder. If you do not address this problem soon, the driveshaft will eventually drop and scrape against the pavement on the road.

Meanwhile, your differentials and wheels will not be receiving the rotational energy they need to spin and keep the vehicle moving.

So, if any of these bearings were to become faulty or worn out, then you can expect the driveshaft to start making a lot of strange noises. There may even be vibrations coming from it as well.

The driveshaft has a tube which spins in the middle as the vehicle is in motion. If your vehicle were to carry too much of a load that goes beyond its maximum capacity, you might find this tube will start to fail.

The first signs of this failing tube will be unusual clunking noises or other strange sounds that you’ve never heard before. The best thing to do is to lighten your load and get your vehicle inspected immediately.