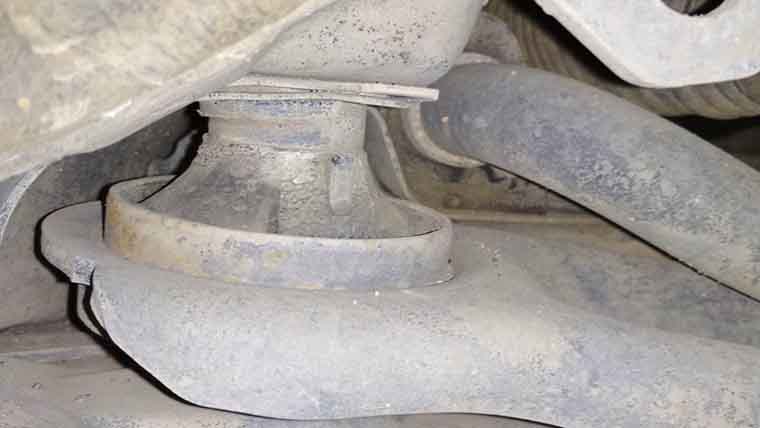 Need help with a car problem RIGHT NOW?
Click Here to chat online with a verified mechanic who will answer your questions.

The lower control arm bushing can easily become damaged or worn out over the course of operating your vehicle. Once this happens, the suspension won’t be firmly connected to the frame anymore. Then you will have all kinds of problems with steering and maintaining a smooth driving experience.

Accidental Damage – A lower control arm bushing is a very small and fragile part of a vehicle. If you have an auto mechanic working on your vehicle, particularly the suspension, then they could easily damage the lower control arm bushing throughout the course of their work. If the bushing is already worn out from being too used and old, then it will be even easier for the bushing to get like this. Once that happens, you should hear some loud and annoying clunking sounds.

Rocky Terrain – If you are frequently driving on rocky terrain or travel roads which do not have an even smooth surface, then your lower control arm and bushing are going to take a lot of abuse. This will eventually lead to the bushing becoming loosened from all the vibrations and roughness of the driving experience. The continued irregular motion will cause the bushing to knock around a lot and get damaged in the process.

Driving Off Too Quickly – If you are the type of driver that switches to the driving gear and then slams their foot on the gas pedal, you need to think about the consequences of such actions. Peeling away too quickly like this will put a lot of stress on your lower control arm and its bushing. If you do this too regularly, the bushing is going to loosen and will be knocked around inside the system.

Not Tightened Enough – The lower control arm bushing needs to be tightly fastened in order to stay strong and durable. If the bushing were to become loose, it would constantly knock into the metal components nearby and cause annoying clunking sounds to be heard. Sometimes the wear and tear driving can cause bushings to become loose. Other times, it could be a mechanic who forgot to tightly fasten the bushing back onto the control arm. In any event, the bushing will get damaged if it keeps knocking into those components.