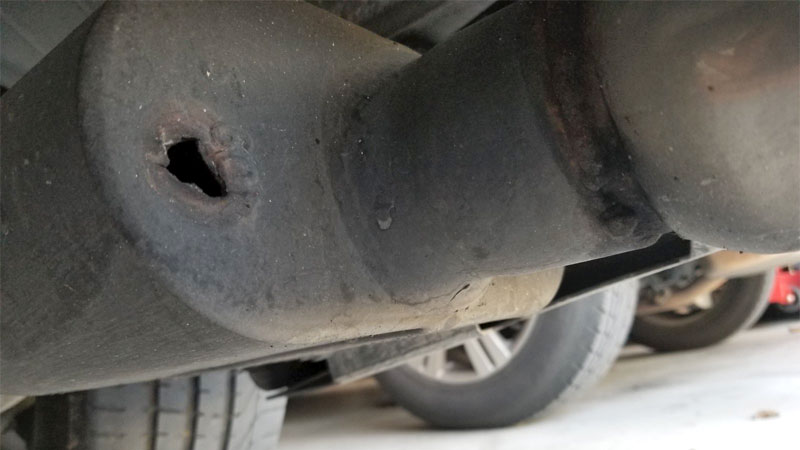 Vehicles come with all sorts of exhaust sounds. Some sound like a jet engine, some give off a low rumble, and others sound like a droning lawnmower.

The exhaust sounds result from careful engineering of the vehicle’s muffler by the manufacturer, but mufflers can be changed and they can break. If you have a hole in the muffler, it can have a bunch of undesirable effects.

Parts of an Exhaust System 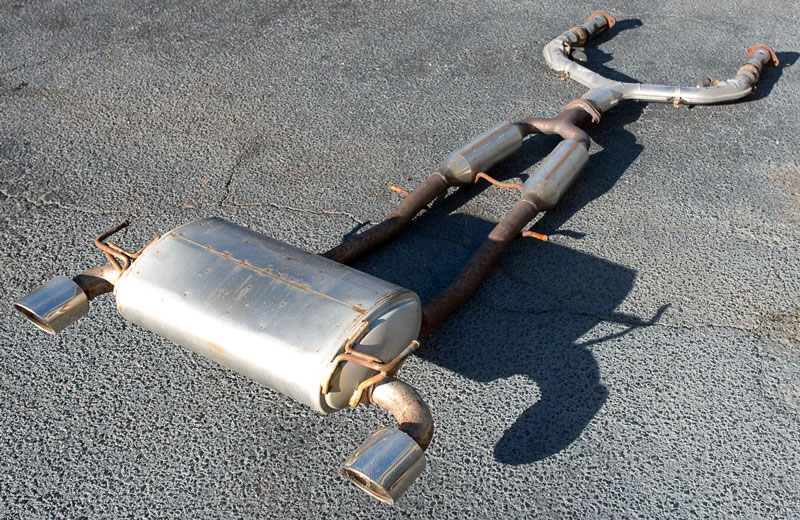 The exhaust system of a vehicle is carefully designed to carry the toxic combustion gases away from the car. Mufflers reduce noise, while catalytic converters transform some of the toxic gases into less toxic gases.

The muffler makes the exhaust noise from the car tolerable (and legal, in some states) with careful design and manufacturing. This reduces the engine’s overall volume and taking the edge off the raspy tone.

It’s helpful to understand the exhaust system to know the potential effects of a hole in the muffler. First, the exhaust manifold carries the waste gases from the combustion chamber on the exhaust step away from the engine.

Next, the hot and high-pressure gases encounter the catalytic converter, uses a catalyst (usually a precious metal like platinum, palladium, or rhodium) to break down some of the harmful emissions.

Toxins like carbon monoxide, nitrogen oxide, and hydrocarbons are converted to carbon dioxide, nitrogen, water, and oxygen. An O2 sensor tells the vehicle’s computer how much oxygen is present at this stage.

Some vehicles place a resonator next in the system. Resonators reduce the amount of noise created by the exhaust pulses, which are waves generated when high pressure engine air meets the low pressure ambient air.

Next is our trusty muffler. This plain-looking rounded box of metal actually contains a series of intricate bends and twists that direct the air in such a way that the sound coming out of the muffler is much quieter than the sound going in.

The air leaving the muffler enters the tailpipe, which is simply an extension pipe that directs the hot and still somewhat toxic gases out and away from the vehicle.

How Does a Muffler Work? 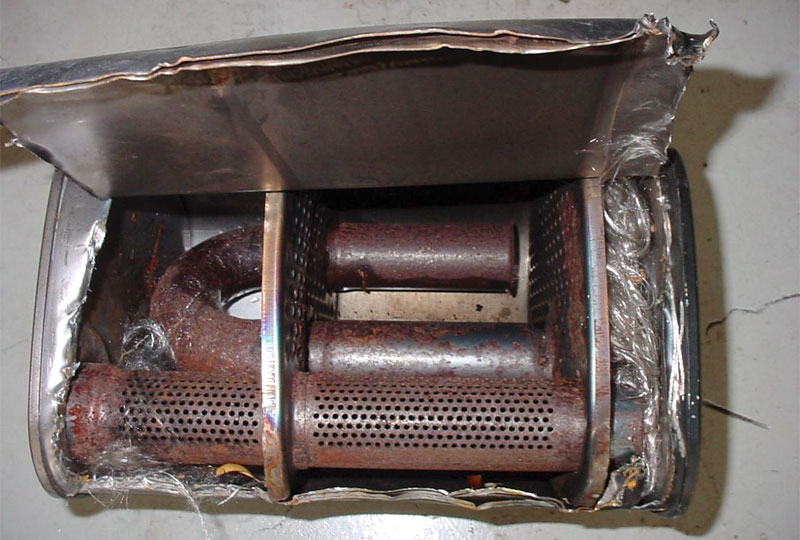 Mufflers need a way to reduce the amplitude, or height, of the sound waves coming in, since that dictates the loudness perceived by our ears. There are a couple of ways to do so: insulation (usually fiberglass) to absorb the sound energy and turn it into heat energy, and using destructive interference to cancel out some of the sound waves.

When waves meet each other, the amplitude (height) of the waves at the same point in time add together to create the sound that is perceived.

Destructive interference means that the waves are out of phase with each other, or the highest peak of one meets the lowest valley of the other at the same time, so they cancel each other out to add up to 0.

Destructive interference is created by reflecting waves into each other so their respective amplitudes cancel each other out. The distance until the surface that the waves bounce off of is calculated so that desired frequencies are canceled out.

For example, some cars are prized for their low rumble. In cars that idle with deep bass, the higher frequency sound waves may be eliminated by using destructive interference so the chosen lower frequencies can go on to be admired by the listeners.

While a muffler does a great job at reducing the amplitude of sound waves coming out, all that turbulence inside the muffler decreases air flow.

This can mean that the hot exhaust gases back up towards the engine and cause back pressure on the engine, which reduces efficiency and power. Making the exhaust quieter while still allowing the engine room to breathe is a tricky balance.

If you are concerned about a hole in your muffler, check for the following symptoms.

If you or a friend notices that the car is suddenly much louder, especially when accelerating, the problem may be a hole in the muffler, since the careful design is disturbed and air can escape before being fully muffled.

If you are in a state with laws governing vehicle noise, you may even get pulled over by a police officer if your car is too loud. 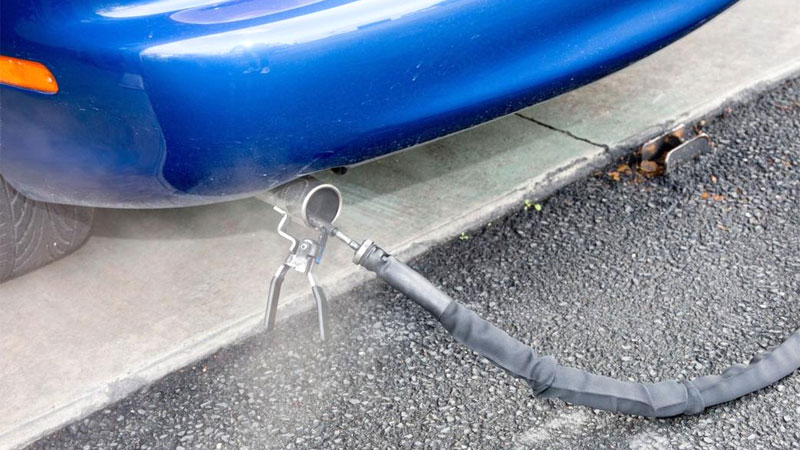 Some areas require an emissions test to register your car. If your vehicle fails the test and you’re not sure why, check all the parts of the exhaust system including the muffler and catalytic converter.

A hole in the muffler that is too large can allow a significant amount of fresh air into the exhaust system, which may confuse the sensors and cause you to fail.

Depending on where the hole is and how good the weather seals are in your vehicle, the gases can actually leak into the cabin. You may or may not smell exhaust gases (carbon monoxide is odorless and colorless) but you may start to feel sick.

Dizziness, fainting, nausea, and weakness are just some of the effects you may experience, and if there isn’t enough fresh air in the vehicle, the resulting sickness can be deadly. If you experience any of these symptoms, get your car fixed as soon as possible. 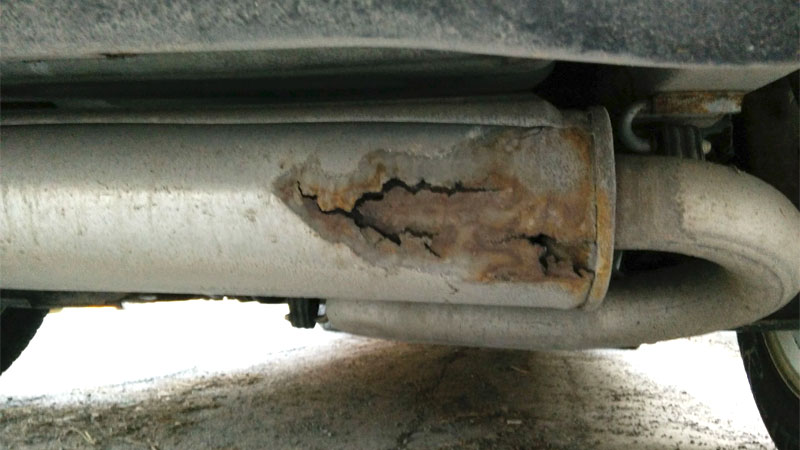 It’s normal for a muffler to have “weep holes” to let water out of the muffler and reduce the risk of rust, but if the holes are rusty then they’re bigger than they should be (or will be very soon). 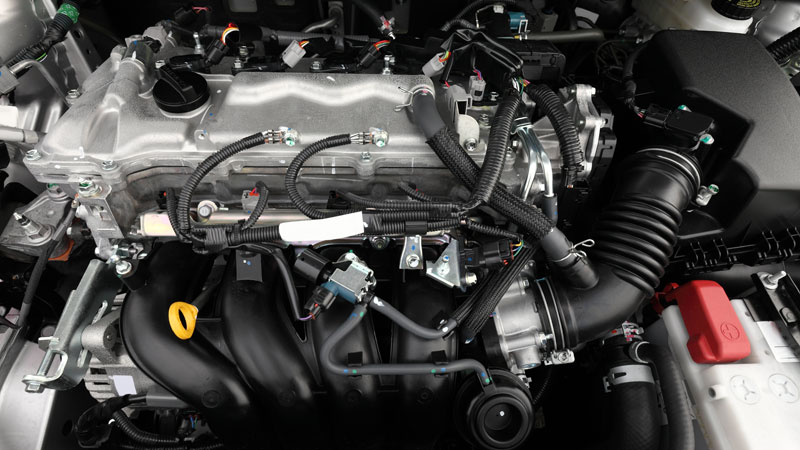 If the muffler has a hole in it, fresh air can come in and mess with the carefully designed airflow. This can increase back pressure and confuse the oxygen sensors, which causes a misfire when the amount of oxygen calculated to be in the combustion chamber is not correct.

For the same reason, the check engine light can come on if your muffler has a hole in it. The O2 sensor is in the exhaust and fresh air coming into the exhaust will give a falsely increased oxygen reading. This will trigger a warning light on the dashboard. 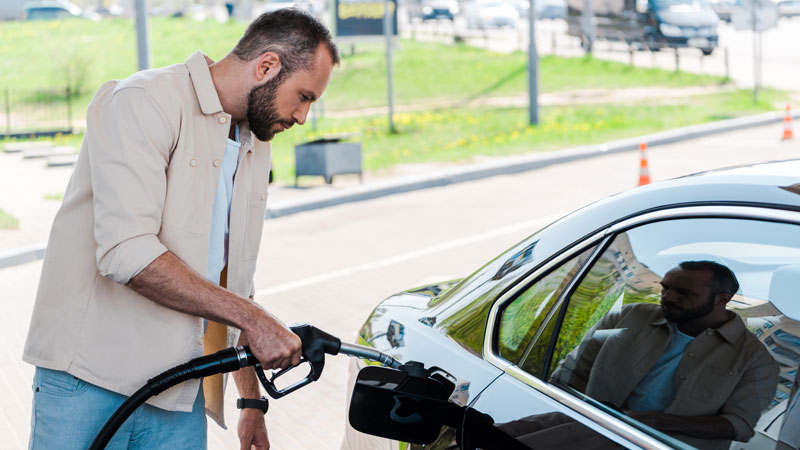 Due to reduced engine efficiency caused by erratic airflow, you may notice a fuel economy that is lower than normal. Since fuel economy changes can signal a variety of problems, it’s smart to track it, ideally manually by dividing the miles driven since the last fill-up by the gallons filled at this refueling.

How Does a Muffler Get a Hole in It?

Most mufflers should last many trouble free years from the manufacturer, but rough driving and corrosion can hasten the decline. If you drive a lot over rough road or drive very quickly over speed bumps, you can expect your muffler to have more wear than if you drove more gently.

Some areas are more prone to rust, such as areas with high salinity from the ocean and those that regularly salt the roads during icy seasons. Since the muffler is low to the ground it contacts a lot of moisture from the ground, making rust a very real risk.

Is It Safe to Drive With a Hole in Your Muffler?

It’s not a good idea to drive for long with a hole in the muffler, since the risk of toxic gases leaking into the cabin can be so harmful to your health.

Some people actually drill holes into the muffler on purpose to make it louder on a dime, but this can be very dangerous and is not recommended.

Can a Hole In Your Muffler or Exhaust Pipe Be Repaired? 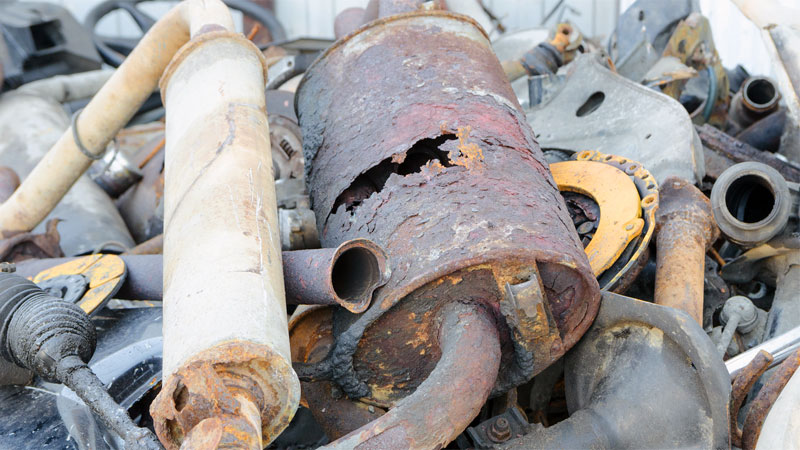 It’s usually better to have the muffler or exhaust pipe replaced when they are damaged. Since the metal is thin and the design is very precise, it often can’t be welded.

However, custom muffler shops are sometimes able to repair a broken muffler by replacing a broken piece of muffler type without compromising its function. These shops are experts in the physics of sound and can engineer a fix that works well to reduce sound without reducing the engine efficiency.

Experts agree that muffler tape, like Tiger Patch or Permatex, is a temporary fix at best. It can’t guarantee that toxic gases won’t enter the cabin or that noise will be sufficiently reduced.

Usually, the problem starts deeper inside the muffler where you can’t see it and manifests externally.

While a muffler can’t easily be torn apart and examined, the effects of a faulty muffler are pretty clear. Don’t wait to repair this, since the consequences can be dire and the fix shouldn’t be too hard.