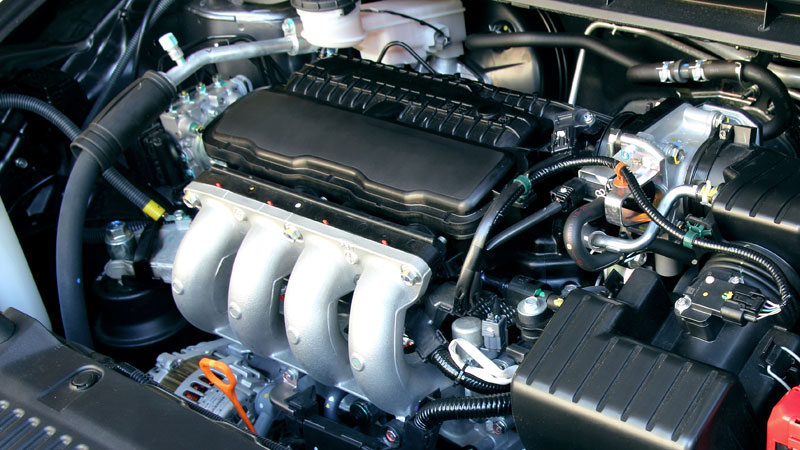 A gasoline engine is also called a petrol engine in many parts of the world. The word “petrol” is what the British use to describe a gasoline engine. They mean the exact same thing, which some people may not realize if they are from America.

A gasoline engine is the most common type of engine found in the vehicles that people drive every day. It uses an internal combustion process that involves mixing gasoline and air together inside of cylinder chambers and then igniting them to generate heat energy.

This is the type of energy that allows the vehicle to accelerate, according to the demands that you put on it as the driver. Here we’ll go over how an engine works along with a bit of its history.

Related: 5 Parts of an Engine and Their Functions

Four-Stroke Cycle of a Gasoline Engine 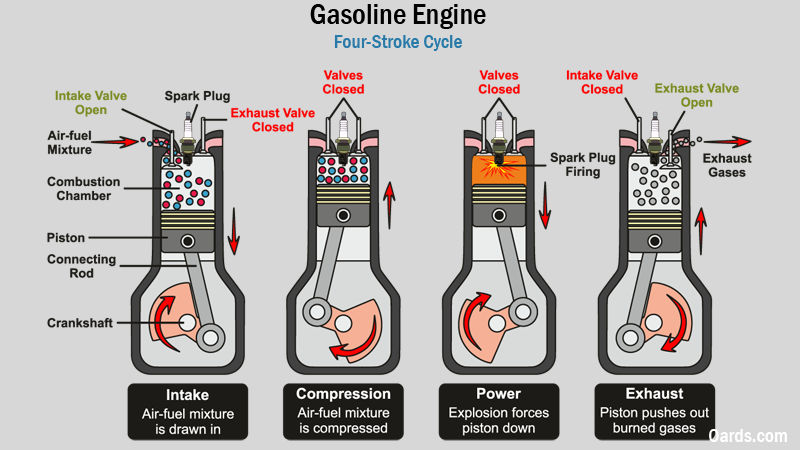 Aside from the term “gasoline engine,” another way to describe this type of engine is by the term “four-stroke engine.” This name exists because the gasoline engine has four different steps that it goes through for the internal combustion process to occur.

These steps are referred to as strokes. Below are what the four strokes of a engine entail.

The first stroke of the engine is the intake of outside air. The engine needs this air as part of the air and fuel mixture.

The intake valve will first open to let the air inside. The piston on top of the cylinder moves in a downward motion. This creates a force which sucks the air into the cylinder.

The second stroke is the compression of the mixture. As the air enters the cylinder and mixes with the fuel, the force of the moving pistons causes the mixture to compress.

Meanwhile, the exhaust valve and intake valve remain shut. It is important they stay that way or else precious gases and liquids could escape and ruin the entire combustion process.

The third stroke is the combustion itself also referred to as the power stroke. This is where the mixture of air and fuel will actually be ignited by the generated spark from the spark plug.

If the ignition is successful, the explosion pushes the piston down where it turns the crankshaft.

See Also: What is a Hemi Engine?

The fourth stroke pertains to the exhaust. As the fuel burns in the combustion chamber, it generates atomized particles that are better known as exhaust gases.

The piston pushes these emissions out of the combustion chamber through the opening of the exhaust valve.

History of the Gasoline Engine

Nikolaus Otto invented the gasoline engine and this four-stroke process. He was a German engineer who patented this invention and named it the Otto Cycle.

Some people find it easier to remember it as the four-stroke cycle or gasoline cycle because they are more closely related to the combustion process in the gasoline engine. After all, the diesel engine uses the term “diesel cycle” to describe its combustion process.

In the early days of gasoline engines, there was a component called a “carburetor” which was responsible for mixing air with gasoline. However, this older carburetor technology was eventually replaced by a fuel-injection system which is electronically linked to the engine control unit of the vehicle.

This allows the flow of fuel into the combustion chamber to be better calculated and precise. As a result, fuel efficiency can be achieved so that you can get more gas mileage and save money on fuel.

At the same time, there are fewer carbon emissions being generated as well. Since we live in an age of eco-friendliness, the fuel-injection system does a lot to assist that.

3 thoughts on “How a Gasoline Engine Works”