If you’ve ever changed a tire on a European car and an Asian car, you’ve probably noticed that there are two different ways to mount wheels to the hub. Many European cars use lug bolts, while most other vehicles use studs and lug nuts.

Is there a difference in these two mounting methods? Turns out, there are pros and cons to each. Here’s everything you never thought to ask about lug nuts and lug bolts.

What is a Lug Nut?

A lug nut is a large nut designed to thread onto a stud. Studs are round, threaded metal inserts that are pressed into the inside of the hub. Studs look like the shaft of a bolt.

On a lug nut assembly, the wheel is mounted onto the hub by hanging off the studs. Once the wheel is in place, the lug nuts are threaded on to secure the wheel to the hub.

Easy Wheel Mounting
Since the wheel hangs off of the studs, it is very easy to line up the wheel with the studs. This is especially important on larger vehicles that have a much heavier wheel and tire assembly.

Many people don’t think about changing a tire until they already have a flat. An easier wheel mounting process could mean the difference between a smaller person changing the tire on their own and needing to call a tow truck.

Less Wheel Options
If you wish to run a wider offset wheel, you may need to buy longer studs. Studs can be difficult to replace at home because of how they are pressed into the hub.

Sometimes, studs can take significant force to remove. Contrast this process with simply buying longer lug bolts, which are cheap and trivial to replace.

What is a Lug Bolt?

Lug bolts work like any other bolt. On vehicles equipped with lug bolts, the hub itself has threaded holes machined into it. You secure the wheel to the hub by threading the bolt through the wheel and into the hub. There are no studs in this assembly.

Fewer Parts
The biggest advantage of lug bolts is they use fewer parts, since there are no studs in the assembly. Fewer parts means less material used and a cheaper manufacturing process. The manufacturer has to spend time designing and testing one less component.

Installation Difficulty
Installing a wheel with a lug bolt requires aligning the wheel, the brake rotor, and the hub all at the same time. Some vehicles come with small, flat alignment screws that fasten the rotor to the hub to make this easier.

Since alignment screws are so small, sometimes they get lost while working on the car. You can drive the car just fine without alignment screws, but missing screws make the wheel installation process notably harder.

Cross Threading Requires Hub Replacement
If the wheel is mounted incorrectly and the bolt is cross threaded into the hub, fixing the mistake will likely warrant replacement of the entire hub assembly. This is an expensive and time consuming job.

A cross threaded lug nut/stud would require only replacement of a single stud. Studs and lug nuts are dirt cheap, and you can grab replacements off the shelf almost anywhere.

Bolts Are Weaker Than Studs
You’ll never find lug bolts on an off road vehicle. Lug bolts are more likely to twist under high torque loads, leading to inconsistent torque values. Bolts are also more likely to yield than studs, which means they have permanently stretched. Any bolt that has reached its yield point must be replaced if it is removed. 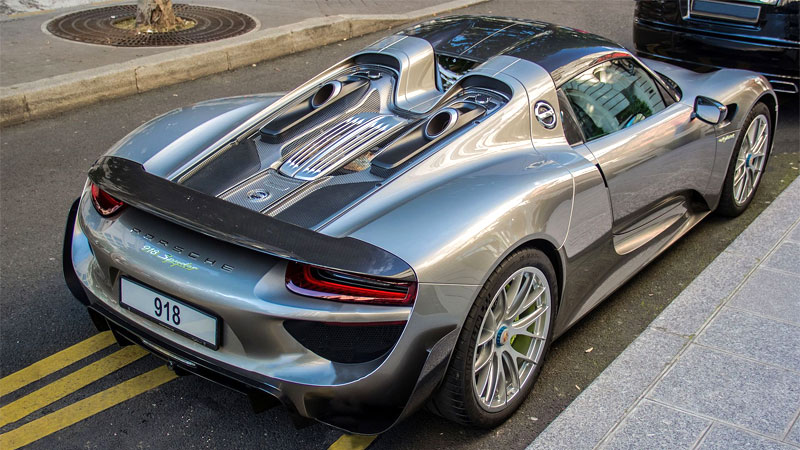 A centerlock is a third mounting method that does not use lug nuts or lug bolts. You typically only see centerlock wheels in racing applications and on high end sports cars like newer Porsche 911s, Lamborghinis, Ferraris, and Koenigseggs.

Centerlock wheels are quicker to install and give more freedom to the hub design. This could be used to give the car larger brakes for better cooling on track. Additionally, center locking wheel designs tend to be stronger.

As a bonus, this mounting style arguably looks better than individual lug nuts or bolts as well. They give a cleaner look to the design of the wheel. While it is often possible to switch from a 5 lug hub to a center locking hub, this process is usually cost prohibitive. Few owners pursue this option.

The only real reason manufacturers opt for wheel bolts over wheel studs and lug nuts is the lower cost to design the car. This cost adds up over millions of units, and is particularly important for high volume manufacturers like Volkswagen. This may allow the manufacturer to offer the vehicle at a slightly lower MSRP for the consumer.

In most cases, lug nuts are the preferred choice. This is the design that is easiest for the home mechanic to work with.