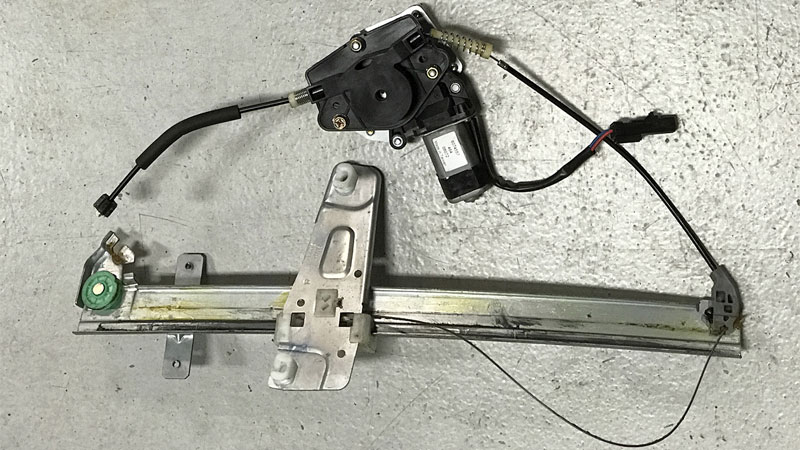 Almost every newer vehicle on the road today has power windows. The benefit of having power windows is that you can lower and raise any door window in your vehicle with just the push of a button or switch.

This is certainly more convenient than the traditional manual windows which required you to crank the windows up and down with your hand. The mechanism which allows power windows to work their magic is called a power window regulator.

How a Window Regulator Works

Every door with a power window has an electric motor built inside of it. This motor is connected to the window by the regulator.

When the person pushes the button on the door to lower or raise their window, it activates the electric motor which then utilizes the regulator to perform the action on the window. Even manual door windows had regulators, but these were a bit different than the power window regulators we have now.

Manual door windows have regulators that look like scissors because they have two metal arms which intersect. When someone cranks the window, they are really cranking a gear that moves the regulator which then moves the window.

These regulators are very heavy because of their metal parts. On the other hand, with power door windows, their regulators are a lightweight cable that is connected to a driving mechanism. Most new vehicles with power windows will have this cable regulator in them.

Here are four common symptoms of a bad power window regulator that you need to watch out for. Any one of these will cause a power window to stop working correctly.

If you are unable to lower or raise a door window by pressing the button for it, then you probably have a bad power window regulator. This is the most obvious symptom of this kind of problem.

There may be a situation where the window will lower or raise a little bit, but then get stuck about halfway in between where you wanted it to go. Anytime you have a stuck window, then you have a regulator that is probably broken.

If the window is able to move and you hear strange noises, this could be an early warning sign of a failing regulator. The noises may sound like grinding, clicking, or chattering.

In very rare situations when you have a severely damaged regulator, the window may literally fall inside of your door when you go to lower or raise it. This is often seen when a car has been in an accident where the door was damaged by another vehicle.

Read also: The Causes and Symptoms of Steering Rack and Pinion Leak

It will only be a matter of time before the regulator gets completely worn out and no longer functions. Once that happens, you won’t be able to lower or raise the power window in that door until its regulator is replaced.

As you can see, it’s not exactly cheap to replace a power window regulator. However, since there is a regulator in each door, it is possible that you will need to replace multiple regulators over the lifetime of your vehicle.