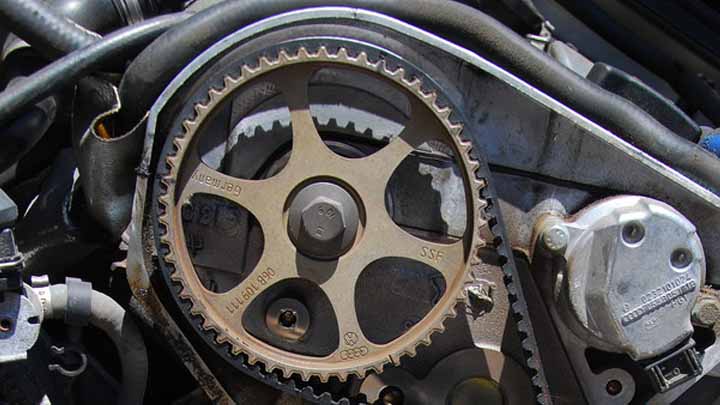 A lot of people get confused about the difference between a timing chain and a timing belt. This is understandable because they both have practically the same function.

Either of these parts can be found in the internal combustion engine of a vehicle. Their responsibility is to keep the rotation of the camshaft and crankshaft synchronized.

These valves are what let in air so that the internal combustion process can take place. They must be opened and closed at just the right time, which is why the word “timing” is put in front of belt and chain.

A vehicle will either have a timing chain or timing belt. Which one is better? Which one is worse? You will learn the pros and cons of each component below.

About 50 years ago, the timing belt was invented for vehicles. It was an alternative to the timing chains which currently existed. The benefit of a timing belt is that they operate more quietly and are very strong.

Another benefit is their price. Because of their material and simple construction, timing belts are much cheaper to replace than timing chains. While the parts cost is low, the labor cost to replace a timing belt isn’t. Timing belt replacement is not a DIY job so expect to pay anywhere from $300 to $1,000 for the job which usually includes replacing the water pump as well.

Like a timing chain, if a timing belt breaks, catastrophic engine damage can occur. That’s why it’s critical you follow the manufacturer’s recommended timing belt change interval. In most cases, this will be somewhere between 60,000 and 100,000 miles. They last about half as long as a timing chain.

Timing chains were originally used in vehicles because they have a very long lifesapn. In fact, most timing chains will last as long as the car itself. This means you can easily get between 150,000 and 200,000 miles out of a timing chain.

This is at least double the amount of usage you can get from a timing belt even though the timing belt was invented after the timing chain. At the most, the only things you will have to replace are the plastic guides which are used for running the chain. They tend to get worn out after 150,000 miles.

As great and long lasting as timing chains are, there are a few things that might annoy you about them. The biggest annoyance is the noise timing chains make. They are known for being much noisier than timing belts. That said, technology in newer vehicles has made the timing chain just as quiet as engines with a timing belt.

Also, it is possible for a timing chain to break completely. Once this happens, it will cause a lot of expensive damage to your engine. You may even need to replace your engine altogether if your timing chain breaks and damages it. Engine replacement would be cheaper than engine repair in this situation.

For those that want a specific vehicle, you’re going to be stuck with whatever component (belt or chain) that the manufacturer uses in that engine. But if you place greater priority on whether a vehicle uses a timing belt or timing chain, you need to think carefully.

If you are the type of person who believes in and follows good preventive maintenance, then the timing belt will be the best choice for you. That way, you can monitor the condition of your belt and then get it replaced if necessary.

On the other hand, if you want something that’s proven to work well and you don’t want to worry about ever replacing, the timing chain will be your best option. Just be sure to check the chain every now and then to ensure it is in good condition.