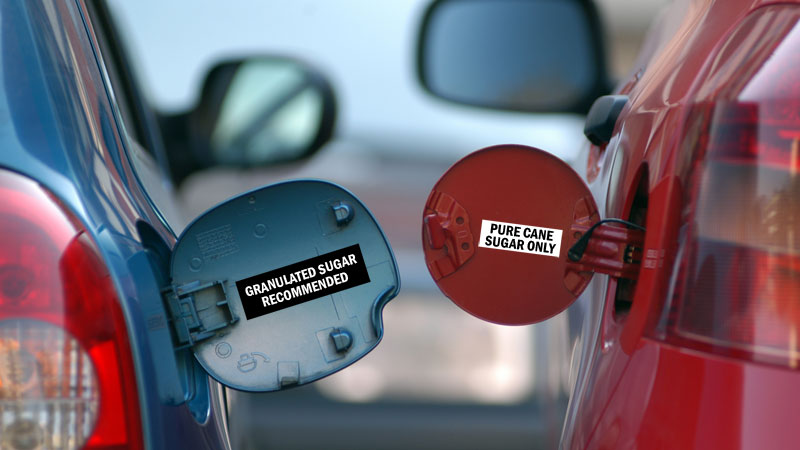 The theory is that if you put enough sugar into a gas tank (please don’t do this!), it will thicken the liquid to the point where it cannot be used. The altered state of the fuel then prevents the vehicle from operating.

But will adding sugar to someone’s gas tank actually disable their vehicle or is it just a silly myth? Whatever the answer is, sugar in gas tank symptoms are not as straightforward as one might think.

What Does Sugar in a Gas Tank Really Do?

Sugar does not dissolve in gasoline as it does in water. It settles to the bottom of the gas tank instead. The granules then move through the fuel transmission lines based on the flow of the gasoline.

Most vehicles have a sufficient fuel filter which prevents sugar from making its way to the engine. With enough sugar in the gas tank, you could clog that filter to reduce the effectiveness of the system, but it would take several pounds to make this theoretically possible.

If you suspect there is sugar in your fuel, then here are the symptoms to keep an eye out for.

Top 5 Signs You May Have Sugar in Your Gas Tank

When there is sugar in a car’s gas tank, the granules begin to clog the fuel intake lines. This obstruction prevents the standard level of fuel from being consumed.

You’ll get surges of power when enough fuel does arrive for combustion, then lulls in acceleration when the clogs reduce the flow of gasoline.

If the fuel transmission lines become clogged entirely, then your car may stall when you attempt to accelerate. You may see the car struggle while idling too, with the possibility of a stall there as well.

The vehicle may lurch when moving forward or reverse, immediately stalling again after restart.

Most sugar in the gas tank symptoms will lead to this result. Severe clogs result in a complete blockage of fuel access. You’ll find that the engine does not want to start at all. It may turn over for you when turning the ignition, but then nothing else will happen.

Continued attempts to start an engine in this condition may wear out the battery, which would create a clicking sound when starting. Premature wear of the starter is possible too, as well as damage to the alternator, engine, or other components under the hood.

If you don’t notice any of the above issues with the sugar in gas tank symptoms, then this issue may present itself during vehicular operation. Some sugar granules do make their way to the engine over time because of the fuel flow.

The heat the sugar encounters around the valves, pistons, and cylinders create a caramelized effect that may coat the engine components. When this happens, you may notice the engine under performs when you accelerate.

If the fuel filter is located after your fuel pump, then the sugar may caramelize on your fuel pump mechanisms. Enough buildup over time would cause the fuel pump to simply stop working, which would prevent the car from starting.

You may hear the pump begin to whine, squeal, or make other unusual noises when a thick coating begins forming.

How to Fix a Sugar in a Gas Tank Problem

If you want to know how to remove sugar from a gas tank to restore operations, then you must manually clean the gas tank and any affected components. You or your mechanic will need to remove the fuel tank from the vehicle, disconnecting it from the fuel pump and lines.

Related: Symptoms of Water In Your Gas Tank

Try to remove as much fuel as possible before starting this job. It will make the tank lighter, and you’ll have less risk of fume exposure.

Place the fuel tank on a level floor. Siphon away any remaining fuel from the container. Then take a pressurized hose to clean the interior of the tank. Empty the water, then take a vacuum, like a Shop-Vac or similar type, to remove any sugar, rust, or debris remaining in the tank.

The final step in knowing how to clean sugar from a gas tank is to wipe down the interior completely. Then allow it to dry for at least one hour to give lingering moisture an opportunity to evaporate.

Sugar in gas tank symptoms do not include the engine blowing up, despite rumors and stories which say otherwise. You may experience difficulties in starting the engine or reduced performance of the car.

When you know how to fix a “sugar in a gas tank” issue to restore its functionality, you will discover this mechanical issue creates minimal downtime.