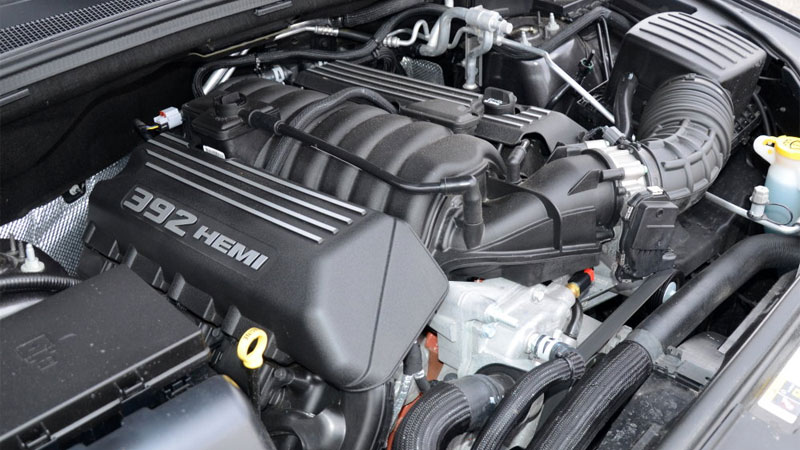 The name Hemi engine comes from Chrysler’s line of gasoline engines that are built with hemispherical combustion chambers. The combustion chamber can be called the heart of the engine and it is the place where the fuel mixture is burned.

The main advantage of such an engine design is that it allows greater air intake which in turn generates highly mixed air fuel mixture and ultimately results in more power.

History indicates that there have been three types of Hemi engines named Chrysler Firepower and they have been built between 1951 and 1958, 1964 and 1971 and todays current generation beginning in 2003. The Hemi engines are series of I6 (straight-six engine) and V8 (eight-cylinder V configuration engine).

What makes this engine design feature unique is the fact that even at the beginning of its life, soon after World War 2, it was able to develop a speed of over 500 mph. This occurred when it was attached to an aircraft named the P-47 Thunderbolt.

Engineers have always considered that such an engine best fits on racing cars due to the power it develops and the great thermal efficiency it provides.

Read Also:  The Meaning of Torque and Horsepower in the Cars

During its lifetime, it has been used on a lot of well-known vehicles, such as the Dodge Charger, Chrysler 300C, Plymouth Superbird, Dodge Challenger, Dodge Durango, and Jeep Grand Cherokee but also on aircrafts and boats.

Advantages of the Hemi Engine

Due to their unique design, Hemi engines can develop more power than many other types of engines.

Hemi engines are known to be some of the most reliable engines around. They have a long track record and can put up with modifications and abuse that others can’t.

It’s quite satisfying being able to drive a vehicle equipped with a Hemi engine and you almost feel like you’re part of a club. That distinctive V8 sound and its exceptional acceleration ability make driving fun.

Disadvantages of the Hemi Engine

Due to its design, the Hemi engine is heavier than other traditional engines. It may not be the best choice for an autocross event but it will feel right at home at the dragstrip.

Vehicles with Hemi engines are fairly expensive, but this is to be expected for something which generates more power than the majority of vehicles on the road. On top of that, you may want to start that “tire fund” now if you plan on buying a Hemi-equipped car or truck.

Because of the power it generates, the engine is not going to be as fuel efficient as other vehicles. However, technology continues to improve to make the engine more efficient, leading to better miles per gallon.

Nowadays, the Hemi engine is considered a great option for auto enthusiasts who enjoy powerful cars. The torque and horsepower it generates, and the experience provided to the driver is unique and this is why this engine has such a long and varied history. Hemi equipped vehicles are a pleasure to drive whether on winding back roads or wide-open highways.

3 thoughts on “What is a Hemi Engine? (and Its Pros and Cons)”